Roads (Not) Taken and Missteps Along the Way 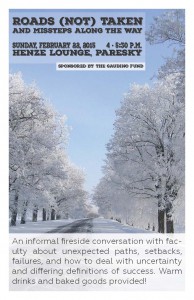 During the 2014-15 year, former Gaudino Scholar Lois Banta and the student trustee members of the Fund’s Board organized public dialogues that encouraged the Williams community to reflect and talk about personal sacrifices they’ve made on the pathway to success. A highlight was an event in February of 2015, ‘Roads (Not) Taken and Missteps Along the Way,’ where 20 students joined six faculty members for an informal fireside conversation about unexpected paths, setbacks, failures, and how to deal with uncertainty and differing definitions of success.

One of the students in attendance wrote:

“The expectation that we have coming into Williams is that the way that classes are run and the academic year is set up is the best way of educating ourselves. That prestige that we were sold on initially becomes a way of rationalizing this avenue of education as the right one and the only one. But at what cost? The cost of sleep, relationships, and mental and physical wellbeing. And at the cost of narrowing our definitions of success in a way that is dangerous. Dangerous to a holistically fulfilling life. The cost of a straightforward and universal definition of success is at the root of many of the problems that face me and my peers. For me, involvement with Gaudino Fund initiatives has propelled me to rethink a straightforward definition of success that can be tallied in transcripts and resumes and has made me much happier with the successes I have achieved.”
—Caroline Bruno ’15 (Gaudino Maine Winter Study and Fellow)

Please visit the Covid-19 website for the latest information, including details about vaccination, testing and mask requirements, and travel.