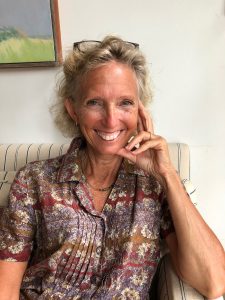 When I began as Gaudino Scholar, I wanted to find a way to spark conversations. I brought to this project a long-standing interest in two broad questions: under what circumstances do people change their minds (about important things), and, what characteristics underlie conversations that lead to new thoughts or points of view?

My original thought was to organize some kind of public installation that was interactive, for instance a red phone booth where students could skype (I didn’t then know about Zoom) students from a very different college, and discuss important and controversial topics (for instance women’s right to choose abortion or free health care for all). After many conversations with artists, activists and psychologists, a simple truth dawned on me, based on my own work in education: I should involve Williams Students in the planning process! And so, we began to meet for dinners, to talk about conversations. Those dinners were so lively and illuminating. I learned that Williams students long for more conversation. Some are eager to talk about difficult or controversial issues, others simply long for more connection with more members of the community. Wonderful ideas abounded, such as a café where, in exchange for delicious free coffee and pastries, you’d sit for 30 minutes with someone you didn’t know and talk about whatever topic was on the “Conversation Menu”, which you found at the table. At a board meeting where I reported on these discussions, it emerged that cars were wonderful places for unexpected and deep conversations. We imagined placing a car somewhere on campus, and inviting people to sit in it and talk.

One other surprising piece of information bubbled up: the power of incentives. Students wanted more conversations but felt little incentive to make time for them. After one seminal discussion with Reid Hoffman, the founder of LinkedIn, and another with Chris Moore, a film producer, I realized that the next step should not be a car or a phone booth, but incentives for students to initiate, collect and participate in conversations. Thus began the Gaudino Student Fellows program. A letter went out to all students inviting them to apply for the fellowship to collect ten conversations over the course of a term, using any kind of theme and structure they wanted. Applications came flooding in. Eleven students were chosen for the first term, and another ten for the second. All in all, 250 conversations were collected, on topics ranging from how people approach one another at Williams, to Israeli-Palestinian relations. One student invited others to prepare a meal with someone they didn’t know (ingredients and kitchen space, along with topic, provided by the Gaudino Student Fellow), others simply walked up to strangers and invited them to talk. The project was so fecund that the following year, we kept going, but in a new way. In the last year of my fellowship I held a series of dinners, each for 12 students to talk about conversations and invite each of them to go out and invite people they didn’t know well to coffee or lunch, in order to talk. In the second term we added a new twist: each student should invite their coffee or lunch partner to talk about something they would never want to say out loud in one of the campus quads: in other words, the topics they feel most cautious about with classmates. We only stopped in mid-march 2020, when COVID-19 shut us down.

All in all, hundreds of students participated in the Gaudino Conversation Project, some as planners, some as conversational initiators, and many as participants. We learned that people at Williams yearn to connect, that they are often reluctant to talk honestly and openly about loaded topics, and that food is the natural partner of conversation. We also learned that while there is a big complex world beyond Williams which students might explore, there is a big complex world right on campus, which students need help exploring.