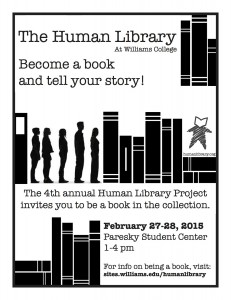 For the past three years, the Gaudino Fund has partnered with the Human Library Committee, comprised of Williams staff, students and faculty members, to convert the Paresky Center into a “Human Library.”  During this event, students and other attendees can “check out” human “books” of various titles representing particular aspects of the participants’ identities.  As individuals or in groups, “readers” are allowed up to thirty minutes of conversation with their human book.  The library and the dialogues it facilitates provide a means of contemplating difference with a goal of challenge preconceptions and prejudices.  The Human Library event in March of 2013 offered more than 40 “books,” with such titles as Man Who Has Never Watched TV, Refugee, 9/11 Survivor, Gay Varsity Athlete/EMT, Williams Admissions Dean and Recovering Anorexic.  In all years, this event was well-received by those who participated, especially students, and its return is much anticipated this spring. The Record covered the event in 2012, 2013 and 2014.

You can visit the official site here.