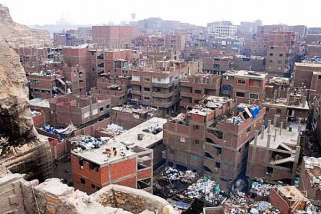 At the secular American University in Beirut in Lebanon and in the Coptic Christian community of Garbage City in Egypt, I undertook an analysis of religious and secular rituals.  My intention was to provide a theory for the way in which means of recognizability can be traced to particular religious and secular rituals. Thus, in juxtaposing the burgeoning secular AUB community with the unchanging religious community of Garbage City, I offer a portrait of the latter community’s rituals as they provide extensive recognizability, and a portrait of the former community’s rituals as they allow only ephemeral recognizability.

The research trip coincided with revolutionary political and religious unrest. While I was in Beirut, all members of the oppositional political party resigned, the Lebanese national unity government collapsed, and violent demonstrations took place, in line with demonstrations across the Middle East. My trip in Cairo came at a time of extreme religious tension, as a result of a church bombing, and the murder of a Christian citizen. It also coincided with the self-immolation of five Egyptian citizens protesting the oppressive Egyptian regime, and unprecedented civil unrest, which culminated in the January 25th  “Day of Anger”, during which hundreds of thousands of Egyptians protested the government, calling for the ouster of Egyptian President Hosni Mubarak.

As a Sunni Muslim, I was restricted from visiting a number of otherwise accessible buildings, as new security measures placed policemen at the gates of most, if not all, Christian youth centers, churches and predominantly Christian commercial buildings. This was the case in both Cairo and Beirut, although the former city employed much more stringent security measures. In both the Christian structures and spaces I accessed, I didn’t announce the intention of my study, per the advice of relatives familiar with both cities and religious traditions, as well as professors at AUC and AUB. My status as an outsider was solidified primarily through two factors: 1. I was a Sunni Muslim in the midst of a Coptic Christian community, and 2. My purpose was to observe and record the rituals and life practices of those around me.

Because of these two factors, as I engaged the inhabitants of Garbage City, I felt like more of an outsider than I had ever before in the Middle East. For the first time, I began internalizing the view of the Muslim from the Christian perspective, that is, a simplistically drawn portrait that misunderstands the “other’s” humanity. This struck me, as it allowed me to reflect on the way in which I am myself misconstruing, mis-recognizing another’s humanness. The disconnect that appeared to me, that between how we view an “other” and how an “other” views itself, was further accentuated, and taken to a different more striking level, as I began attempting to articulate the disconnect in theoretical terms. This was due to the fact that language, as I had employed it, was a means of explaining that which I felt and experienced. But language – made of the words, vocabularies, structures that had been set in place by the philosophers and sociologists I had studied – were not able to describe properly the kinds of things I was feeling. In fact, thinking about language seemed to violently rework the feelings I had, to try to pit them against, and then fit them into, a language structure. Thus, while the physical experience of occupying an “other’s” space was grueling and often uncomfortable, what left me most uncomfortable was thinking about the way in which two cultures, each employing a different a language, clash into each other, and are unable to fully comprehend the other. Put briefly, these reflections taught me to understand my limited ability to acknowledge an “other” and consequently, to allow myself space to understand