Excerpted, with editing, from an article in the Williams Alumni Review, summer 1990, by Seth Rogovoy ‘82.

Robert L. Gaudino came from the University of Chicago to teach in the Political Science department at Williams in 1955. He stayed until 1974, when he died at the

tragically young age of 49, felled by a rare, progressively debilitating neurological disorder. In his 19 years on the Williams faculty, Gaudino made an indelible mark on the College through his impact on his fellow professors, his students and the educational and social processes there. Few students can spend four years at Williams College today without — knowingly or not — being touched to some extent by Gaudino’s legacy.

Coming from a classical background in political philosophy, he pioneered experimental programs in “experiential education” that were somewhat controversial at the time. 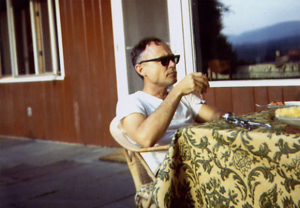 A popular teacher, he was beloved by students for his engaging, personal enthusiasm that extended far beyond the confines of the classroom. He was a man-about-campus, as likely to turn up at a football game as at a movie, a play, or an evening lecture. Indeed, when Bob Gaudino was around, many an evening lecture wold formally adjourn only to continue late into the night as a parlor discussion at this home behind Mears House, where the parade of such activities and get-togethers resembled a sort of informal, European-style salon. He often played a key role at departmental and faculty meetings as an unofficial moderator, replicating his classroom role as guarantor that all opinions were voiced, accurately represented, characterized and categorized.

Respect for classmates’ ideas and opinions was as much a prerequisite in Gaudino’s classroom as was respect for the ideas in the classical political texts. “On campus, it was critical to him to have everyone represented,” remembers Scott Miller ’71. “Everybody had a point of view that was of interest to him.”

Gaudino’s experience as a director of a Peace Corp training program in the summer of 1966 led to the first of his off-campus “experiential education” programs — Williams-in-India, a yearlong program of concentrated study of transition and social change. Fifteen sophomores and juniors took part in the program, which included courses in the fall and winter before embarking on five months of residence in India. While in India , students lived in cities and villages in dormitories and homes, pursuing independent projects and meeting with political and business leaders as well as villagers, religious leaders, teachers, planners and social workers.

More than anything, however, the participants wound up reflecting on the “unsettling experience,” a cornerstone of Gaudino’s educational theory of “uncomfortable learning” that suggested there could be no education without intellectual and emotional change, and that the College should “actively promote a range of experiences that have the creative potential to unsettle and disturb.”

Gaudino persisted in his attempts to devise educationally sound, off-campus programs for Williams students, many of whom, he believed, were lacking in enough “unsettling” or “foreign” experiences necessary for any meaningful learning to occur. Toward this end, he implemented the Williams-at-Home program in 1971-72. 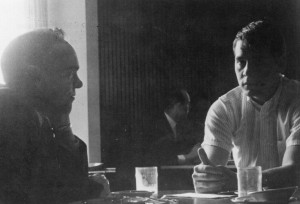 Like Williams-in-India, the 18 participants in Williams-at-Home spent the fall semester preparing for their off-campus experience in an intensive course titled “Public Authority in America.” In the winter and spring, the students lived and worked with families in various locations in the deep South, in Appalachia, Iowa and Detroit. In between each stay, the students would get together for a week at a time to try to synthesize their experiences in a formal paper, and to share their insights and frustrations.

Gaudino emphasized that the purpose of these programs was “not just to have experience. It is to reflect upon it, to let it enhance or inhibit our sense of self. It is both to put us inside experience and to move us beyond it.”

“He was something of a lens,” recalls Jay Nelson ’70, who later became a trustee of the Gaudino Fund. “He tended to focus first on the student, on his interests and his personality, and then, as with the lens to light, he would be able to intensify your curiosity and both mobilize and motivate a quest down a road that was particularly suited to the individual student.”